Moulding Through the Ages 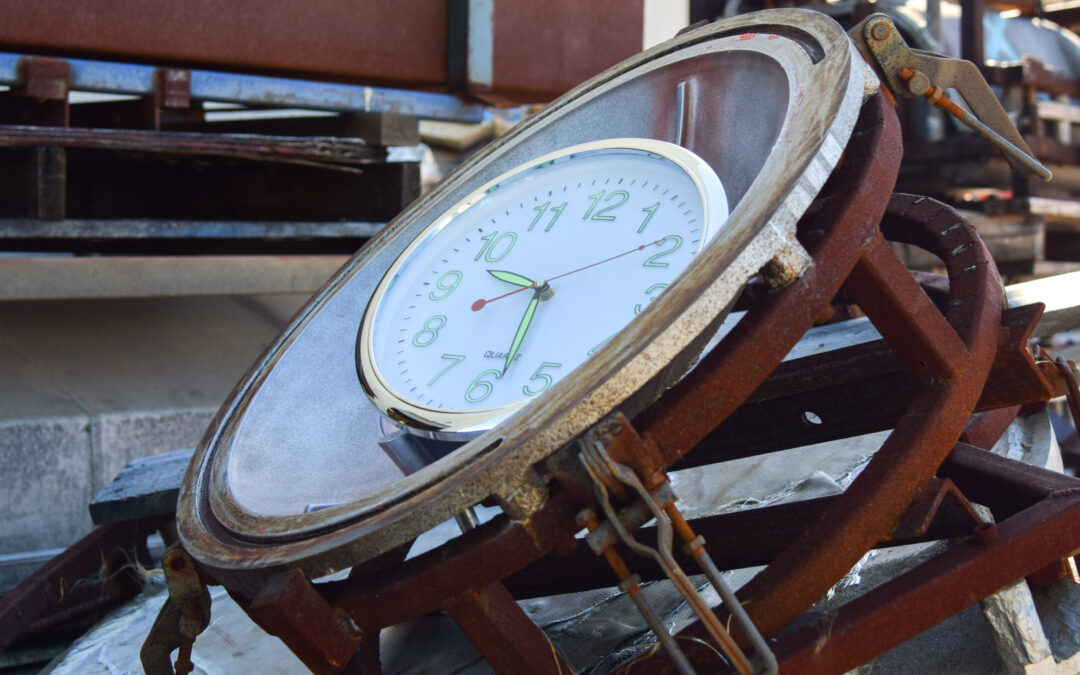 A mould, or a tool, is a hollowed block with a purposely shaped cavity which material is poured into to take its shape. Manufacturing with a mould is typically called casting, however with plastic, the more common term is moulding.
You can learn more about the various moulding methods here.

Moulding is an ancient practice and a much-refined skill, and likely the most common manufacturing process, dating back over ten thousand years. When we look at the timeline of casting or moulding processes, we see that the evolution of moulding, from stone to metal to plastic, parallels with the development of the manufacturing industry and of human progress.

Stone moulds dating back to caveman times reveal the production of bronze axes in the early humans, demonstrating the universal significance of this manufacturing method to the success of our civilization[1]. It has historically been used for fine arts, baking, science, and of course manufacturing purposes.

It is undeniable that moulding processes have been integral to humanity’s evolution across the globe. Throughout the years, moulds have evolved drastically, taking us with them from more simplistic, hand operated methods, to a world of automated machinery and mass production.

There is usually a precursor with every so-called “discovery”, like an ever receding “tunnel” of reflected mirrors[2] .  Thus, there is much debate regarding who were the first to use moulds for manufacturing. Many groups can trace casting processes to ancient techniques including Mesopotamia, Egypt, Thailand, China, and India.

Mesopotamians were found to use casting methods as far back as 9000BC. The region previously known as Mesopotamia, today includes Iraq, Turkey and Syria, and from here it is believed that casting techniques were spread across to other regions through traders[3].

Copper castings were used to create horse harnesses, agricultural tools and homeware as well as some weaponry[4]. Moulding materials used included stone, limestone and clay. The Mesopotamians originally used open moulds, but were quick to note the increased efficiency of a closed mould; however, they also then encountered an issue which is still a challenge for manufactures today; “flash”, or excess material which builds and leaks through the conjoining line in the tool’s middle. 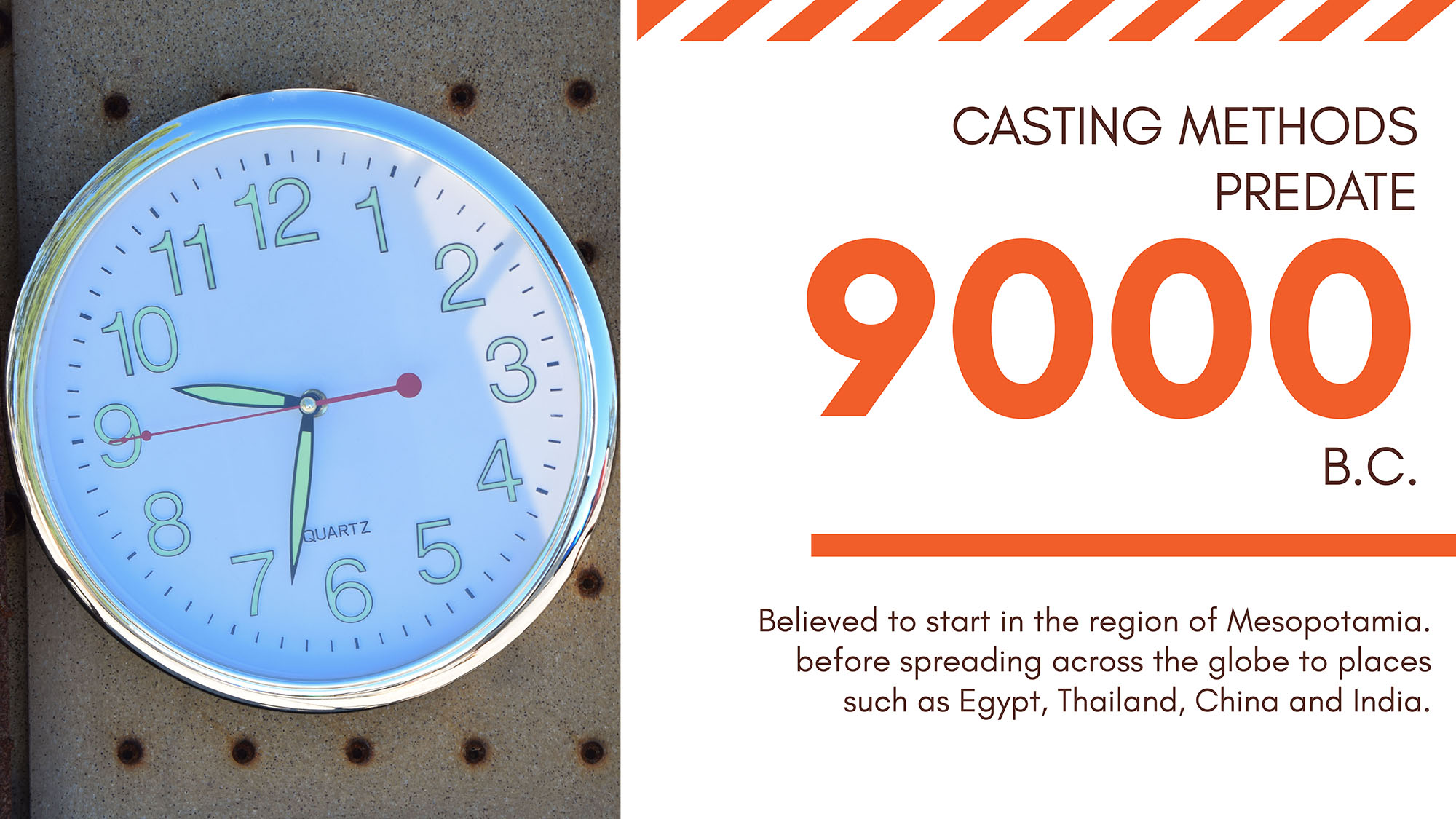 The Egyptians were also one of the first people to utilize moulding methods. Some even argue they were the first rotomoulders, creating pottery and jars for rituals, burials, and other ceremony events. While they did not have a multiarmed turret machinery with machined biaxial rotation, arm indexing, and Bluetooth and wifi control capabilities, they did have “slurry”; a delicious, syrupy suspension of clay and dispersing agents, which were poured into a plaster mould until the inner surface layer had hardened, before being drained and dried for removal[5]. This process, known as ‘slip casting’[6], was used to create objects which were essential to the religious practices that are central to ancient Egyptian civilization and life.

At around 2000BC, China joined the Bronze age and began contributing to the moulding scene. They changed the game with their significantly advanced casting techniques to prove themselves as true manufacturing masters of their time. Similarly to the Egyptians, spiritual practices were central to their lives, which heavily directed their manufacturing efforts. Many of their weaponry and ritual vessels were embossed or engraved with a pattern known as Taotie[7].

The Chinese also were the first to get a good grasp on alloys, or admixtures, with an understanding of material properties and how to control them. They were able to produce thinner walls, and were creative with the issue of flash by trimming or by incorporating it into the design of the object. They also developed a new trick for larger and more intricate moulding: they separated the object into segmented pieces which are individually cast and then assembled and molded together. This is how they produced the famous ‘Terracotta Army’, consisting of thousands of hollowed, moulded pieces which may have also been the first rotationally moulded parts[8].

Furthermore, technical papers from Dreden, Germany in 1780 reveal to us another contender as the first applied rotational moulding; the Chinese were recorded to have created hollow figures by pouring material within a vessel, which was rocked and rolled in multiple directions whilst an external heat is applied to melt it down. This method is still used today in what are called ‘Rock N Roll’ rotational moulding machines. They are commonly used for products such as kayaks and other long, narrow parts.

The first century marked the beginning of a process today called blow moulding; the Syrians claim first place for this particular moulding development[9], specifically glass workers who experimented on glass bulbs and found they could create many useful, hollow forms. In the Europe, this process was refined to accommodate for the large demand for wine bottles. While this glass blowing process didn’t involve a mould, it was a precursor to current day blow moulding processes.

Evidence suggests that ancient Egyptians may have also dabbled in glass moulding at around 1550 B.C. for ointments, perfumes and oils as well as other religious practices[10]. Even before they developed and utilized glass blowing techniques, they used an interesting “core-vessel” process[11].

Before there was parisons and machine-operated compressed air, there was a stick and some poo. A preheated “core”, preferably one which molten glass will stick to, needed to be placed onto the end of a metal rod. The glass was then either to be poured over the core, or the core dipped into the liquified glass, which then hardened into the desired vessel[12]. This core had to be made of a material which is both heat resistant and porous, and luckily enough for the Egyptians, animal faeces possessed those exact qualities and was in great supply!

A BRAVE (AND SHINEY) NEW WORLD.

By the 1600’s, humans globally seemed to have gotten the hang of moulding manufacturing. The Swiss were using moulding processes to make hollow chocolate eggs[13], while a published 1660’s cookbook, “Accomplished Cook” by Robert May demonstrates the creative use of seashells and scallops to mould decorative jellies.

Then, in 1885, a significant patent was issued to R. Peters of Britain. This patent was for the manufacturing method of using biaxial rotational and heat, and was mostly used to create metal artillery shells and hollow vessels. Today, this method is extremely popular in plastic production, and is known as rotational moulding. The first seeds of this branch of the plastic production industry was officially planted! 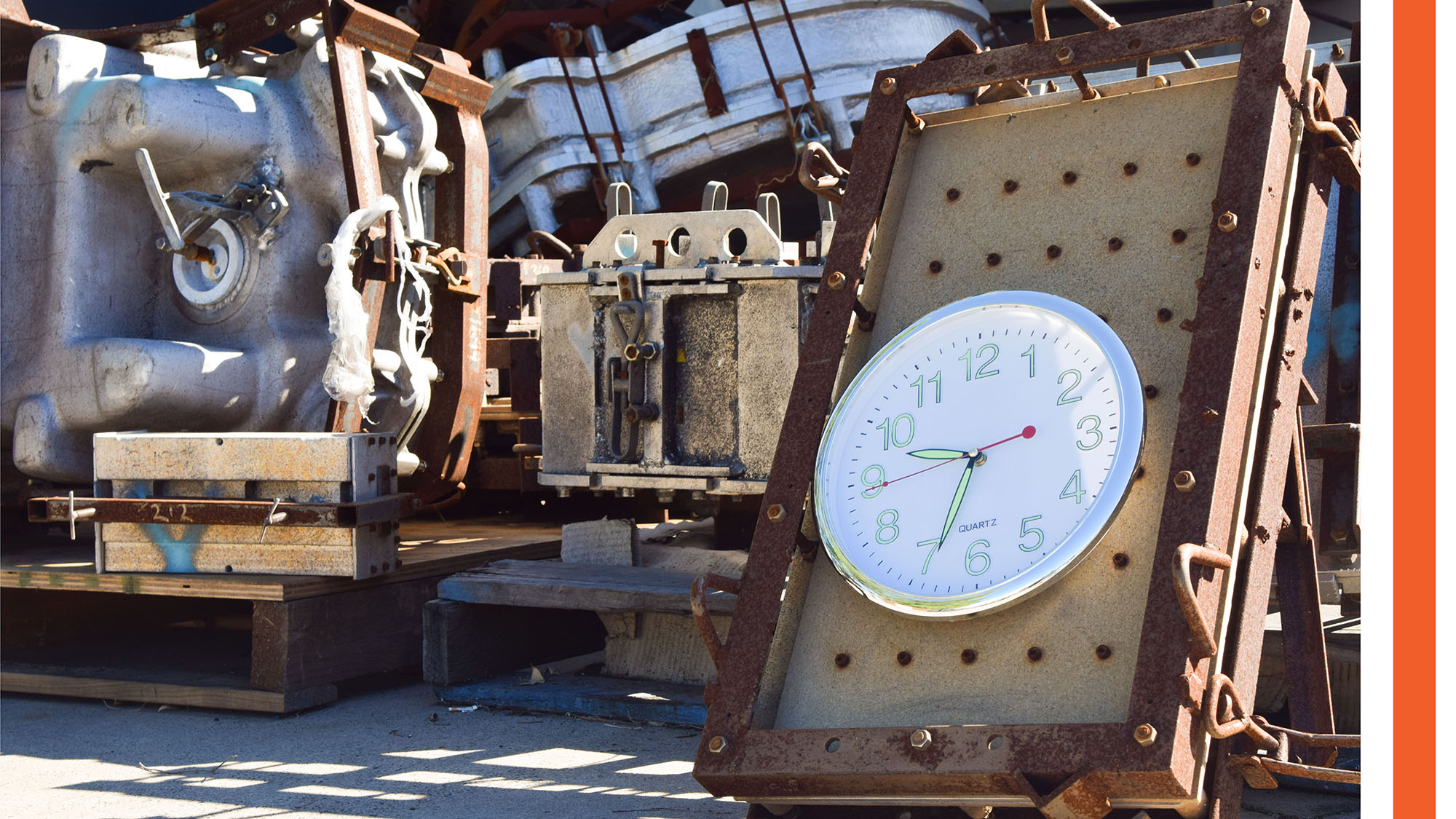 In 1872 marks the next milestone; following his invention of plastic a few years prior, John Hyatt and his brother created the first hand-operated injection moulding machine[14]. In 1910, G.S. Baker and G.W. Perks are issued a patent for a “machine for moulding chocolate and the like” – once again, we see the significance of the chocolate egg[15].

During this time, many forms of plastic materials were being introduced for the first time, creating a new world of shiny plastic and technological innovation. In 1920, R.J Powell became the first person to mould with plaster of Paris[16]. He also introduced and patented the commonly used 4:1 ratio between the axes of rotation, to be combined with slow speed for optimal moulding results.

The 1930’s marks the next advancement in moulding processes, with the invention of hydraulic systems. Injection moulding machines received their first upgrade, just in time for what the world was about to face: the Second World War.

This global catastrophe happened to be the catalyst for the domination of plastics in the manufacturing field. As countries experiences shortages in materials such as rubber, plastics popularity skyrocketed as an ideal and inexpensive method of mass production. At this point, rotational moulding was in its preliminary years, due to slow processing, but PVC plastic was often rotationally moulded for products such as doll heads and squeaky toys. Injection moulding, however, was in high demand.

Additionally in 1938 blow moulding made the upgrade into the plastics industry; inventors Enoch Ferngren and William Kopitke created the first plastic blow moulding machine[17]. They sold it to the Hartford Empire Company, however throughout the 1940’s it was minimally used due to plastic still being a relatively new material, and blow moulding very much a new artform.

Throughout the 1950’s, most of the significant improvements in moulding directly correlated with the evolution of plastics. More traditional casting materials were quickly taking a backseat to the powerhouse that was becoming the plastics industry.

As manufacturers attempted to improve materials and adjust techniques, they were essentially growing into their own new, shiny skins. Improvements in process control and plastic powder formulas allowed for significant improvements in moulding processes.

Whilst we continue this investigation into the evolution of moulding, we will remain exclusively within the context of plastics. Because that’s what we do best.

Injection moulding remained at the forefront, evident in the popular tourist attraction known as the ‘Mould-a-rama’ machine. However, new opportunities emerged with the invention of cast aluminium moulds, which provided rotational moulding with outstanding flexibility for wall thinness and opened the possibility of producing more complex shapes. The competition was on.

In 1950, Kautex Werke from Germany began to develop and offer commercially available blow moulding equipment[18]. 1953 then marks the invention of High Density Polyethylene (HDPE) by the Phillips Petroleum Company in the United States, and Professor Zieglar in Germany[19]. However, blow moulding was still outshined by injection and rotational moulding.

From the mid 1950s, rotational moulding slowly began to carve out its role as one of the most popular moulding methods. This was largely due to the advancement known as The Engel Process in 1956, Europe. Prior to this method, the cooling process in rotational moulding involved dunking the part in cool water.

However, this came with significant risk of warpage due to the rapid change in temperature, and meant that production capabilities were limited in size and wall thickness. The Engel Process involved indirect, high velocity air and fan/cooling, allowing for larger and more intricate shapes to be created.

1964 was perhaps the biggest turning point for rotational moulding; McNeil-Akron invented the first multi-arm turret machinery, allowing for more than one product to be cooked or cooled at a single time. This significantly sped up manufacturing, which was the predominant issue faced at the time, and also officially challenged the ancient Egyptians in production efficiency.

The Association of Rotational Molders was assembled in 1976, starting in Chicago as a worldwide trade with an aim to raise awareness on rotational moulding and its growing potential. Throughout the 1980’s, as the multi-armed turret machine spread across the globe. Increased demand for rotational moulding services and products meant there was a sudden streamline of new materials and grades which were ideal for industrial settings. This included polycarbonate, polyester and nylon. The Rotolog system developed at the Queen’s University provided precise monitorization and control of cooling processes. The ancient Egyptians now had no chance.

Then, finally in 1970, blow moulding totally took off. Nathaniel Wyeth from the DuPont company blows the first PET bottle from an injection moulded PET preform. Then, Coca-Cola test markets the world’s first plastic soda bottle. The amount of plastic containers present in the soft drink industry in the United States went from zero in 1977, to ten billion in 1999[20]. These overwhelming numbers are just an indication of how plastic has entirely dominated the manufacturing industry even before the turn of the 21st century. 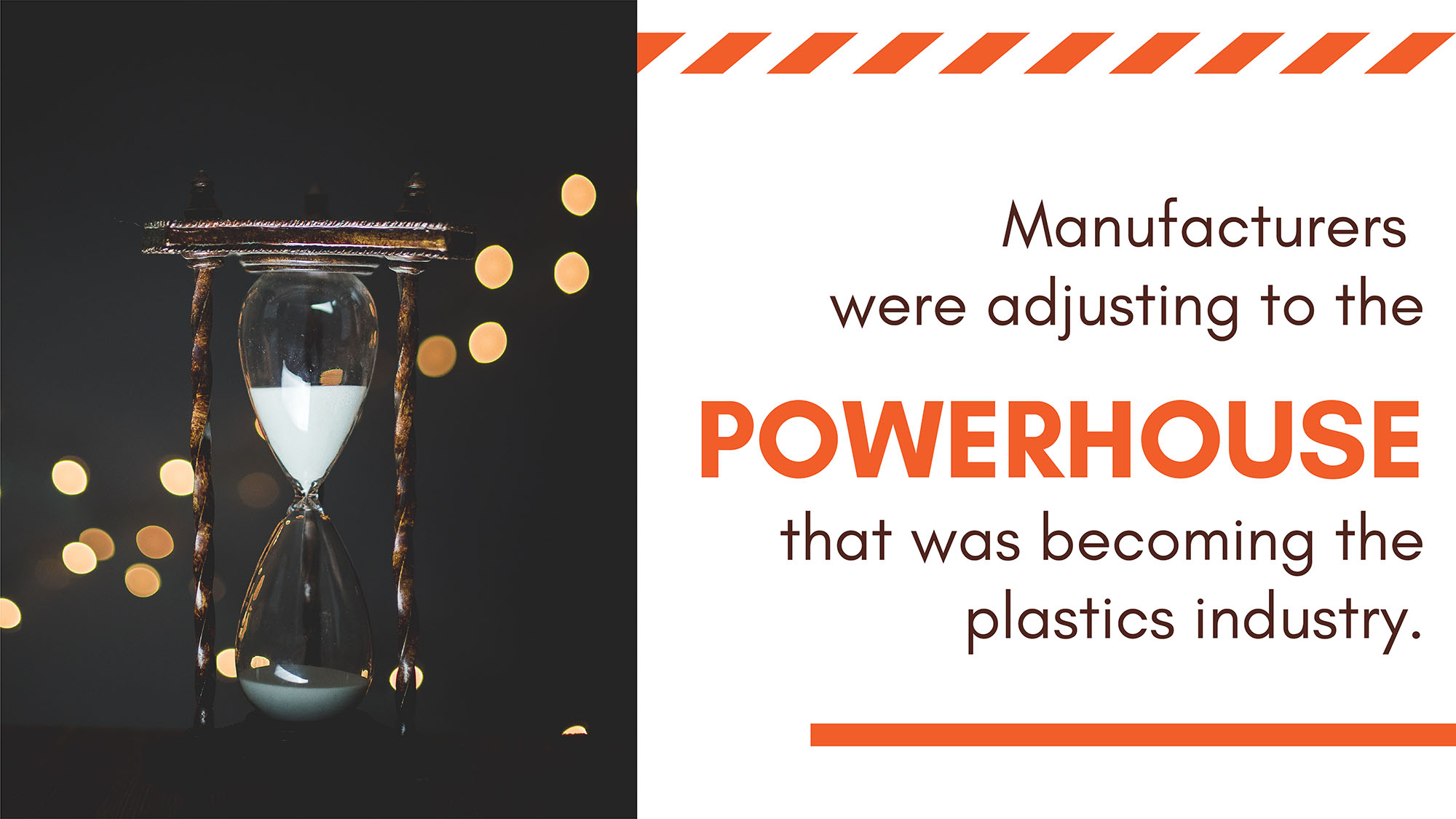 Production trends come and go, but moulding is forever. Manufacturing has come a long way; we’ve seen changes in materials, and technology has taken us into a chaotic world of mass production. But what has remained consistent, a true friend to manufacturers across time and place, has been the sturdy mould.