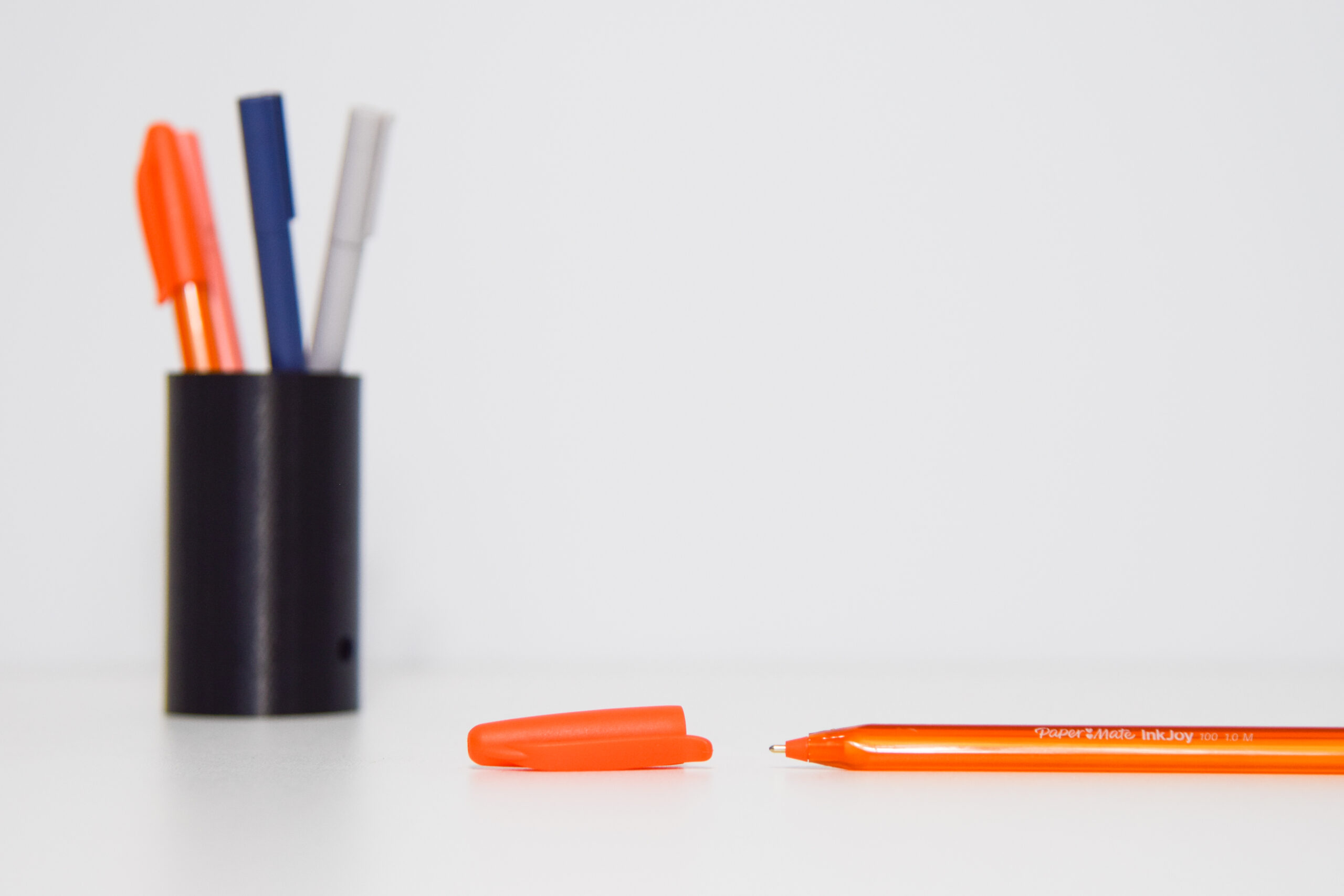 Next up on our list of Iconic Plastic Products, we have a list-making essential: the Ballpoint pen.

A seemingly simple product, most people don’t question the manufacturing or design of their pens. Reliable and abundant, they are always there when we need them, except when they’re lost into the abyss where stray paper clips and missing laundry socks go.

But take note: behind the writing utensil’s wise and unproblematic appearance, there lies a larger story about overcoming the struggles of war, ink spills, and waste. This is the story of the Biro brother’s and the Ballpoint pen.

Invented in June of 1943 by brothers Laszlo and Gyorgy Biro, who were Hungarian refugees living in Argentina, having fled during the peak of the Second World War.

Lazlo worked at a journalist who was tired of dealing with smudges, splatters and tears when writing. Upon realizing that their printers were struggling significantly less with this, he sought out to create a pen using the same ink and technique. He was also a hypnotist, racecar driver, and a Surrealist painter.

From refugees, to journalists, to inventors of today’s most prevalent pen, a single inspired idea moved these brothers out of the shadows that war had cast upon them, and into a new world of mass manufacturing, proving once again that the pen is mightier than the sword!

Ballpoint Pen Day is on June 10th, paying tribute to the day its patent was filed.

Whilst a seemingly basic writing utensil in the world of fine writing arts, the Ballpoint pen is essential and universally loved. You can check out great reviews of the best ballpoint pens available in the market today here for a interesting insight for your next pen purchase.

To celebrate this holiday with other Pen loving pals, you can share some pictures of your favourite pens on your social media. Treat yourself to a new quality personalized pen, decorate your pens with coloured tapes and chains DIY style, or gift some new novelty pens to your friends and family. Make sure to use the tag #ballpointpenday! 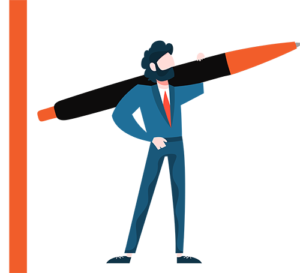 The design of the Ballpoint pen took many attempts by different inventors before the Biro brothers found their solution. In other words, it took a lot more than just putting pen to paper, so to speak.

There are five parts to the ballpoint pen: the cap, barrel, ink tube, ballpoint, and tip. Most of these components are made from PPC, however the key part of the pens design which accomplishes its functionality is the metal rolling ball at the pen’s drawing point and metal tip. As portability had already been actualized in the writing scene with the invention of the fountain pen, the ballpoint pen was created as a cheaper, clean-lined alternative. Ink is stored inside the casing’s internal reservoir, which one side of the rolling ball picks up. Then as the ball rolls, it evenly disperses the liquid at a suitable pace as it is used, and also acts as an air buffer to protect the ink from oxidization which would occur upon contact with the air.

The reliable ink flow is what secured the ballpoint pen’s success against its competitors and created the comfortable writing experienced we have today. Initial designs by John L. Loud in 1888 for a similar product used a ball and socket, however it experienced issues as it only wrote with overly sticky ink, which only worked well on leather and cloth. Other designs also showed issues with the ink, specifically with overflow and clogging.

Amazingly, a single ballpoint pen in 1945 sold for about $12.50, which is the equivalent of $227 AUS dollars today! Writing was sadly only for the rich. Happily, though, today it is the most common writing utensil, being as cheap as 10c for a pen!

Pen caps and ink tubes are made from Polypropylene Copolymer (PPC), which is a variation of PP which is a bit softer, with better impact strength and slightly more durable. This plastic is extremely strain resistant and has low moisture absorption, both which as essential for the function and handling of the pen.

The barrel of a plastic ballpoint pen is usually made from polystyrene. The components are usually injection or extrusion moulded individually, then assembled.

The invention of ballpoint pens came at a perfect time for the Air Forces; in the Second World War, Ballpoint pens were preferred by pilots as they are less prone to leaking at high altitudes, especially in comparison to the fountain pen.

This is because when pens are taken 7500 feet in the air, the air pressure is significantly different to that inside the pen casing, which usually causes the ink inside to gather near the entrance of the nib as the air inside expands attempts to re-pressurize. However, Ballpoints have a controlled ink flow which uses capillary action upon surface contact, and so are able to perform in these conditions more effectively. Whilst the U.S. Army Air Force were eager to begin manufacturing, the Royal Air Force took a little more convincing, though they would also eventually order more than 30,000 Biros.

Additionally, due to the Ballpoint pen’s reliance on gravity to work, writing upside down or in space has always been a little tricky.

During the Cold War, the United States spent approximately one million dollars on making “Fisher Space Pens”, which utilize a pressurized reservoir forcing the ink to the ball’s point. The rear end of the reservoir is also sealed, preventing leakages or evaporation. While many joke that the Russians solved this issue for one dollar by simply using a pencil, this pen is a high tech device which can reportedly write under any conditions, including underwater!

Fun fact: the largest Ballpoint pen is 5.5 meters long, weighs 37.23kgs, and was made in India by Acharya Makunuri Srinivasa.

Supposedly, the average Ballpoint pen today can last the writer up to 2 years, and modern ballpoints can draw a line up to 2kms before running out of ink, which is decent in terms of a stationary product lifetimes. They use two kinds of raw plastic materials, and their popularity means their transportation and distribution are handled by local freight companies to maximize environmental efficiency and lower their carbon footprint. 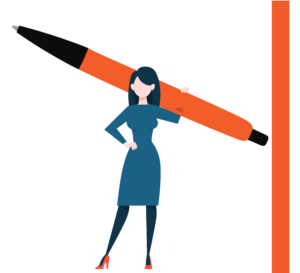 Waste management for pens may be more important than you expect; despite their comparably tiny size to some of our other products, they critically accumulate in landfills to the point of overflow due to their high demand and consequentially tremendous manufacturing rates. Approximately 2 billion pens are produced every year. However, only part of the pen can be effectively recycled. Additionally, more than 1.6 billion pens are estimated to be simply thrown in the U.S. alone each year, despite being in near-perfect conditions, to be taken to landfills. This is an evitable issue which manufacturers, designers and stationary industry leaders are attempting to tackle.

Unfortunately, pens cannot be incinerated due to toxic chemicals released, such as dioxins. They also cannot be mixed with other recyclables, as they contain various materials which can compromise the machinery. Instead, it is recommended that you gather and then dispose of used pens at places such as Officeworks and Waster which provide recycling options for certain accepted types of plastic stationaries.

Finally, not all ballpoint pens are disposable; some are instead reusable, with the ability to refill the casing inside. This is ideal, as reuse elongates a products life cycle significantly and can have dramatic effects on the overall waste and manufacturing industries.

With the development of new writing technologies and computer programs, some like to argue that the pen is slowly falling into irrelevance. However, this is proven to not necessarily be the case. 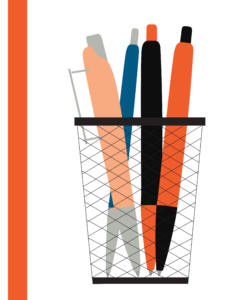 Firstly, the emergence of digital pens, such as the Neo SmartPen demonstrates how handwriting is not yet being tossed to the side, instead being brought into the computer age by evolving a virtual form. While these are not traditional, ink-reliant pens like the Ballpoint, it’s evident that there is still an strongly attached appreciation for writing utensils. We also see this with the 3D Doodler Pen, which follows similar processes to 3D Printing, but in pen form.

Secondly, there are still many useful improvements to the original pen design which are being explored. They seem to have a permanent place in our society, especially seeing as pen production has not really decreased in popularity since the emergence of the digital age.

Some companies are redesigning the pen to better suit the human hand in order to improve handwriting legibility, speed and comfort, and even tackle illnesses such as arthritis. PenAgain Cramp Free Pen or the EvoPen and examples of this. Some pens are designed to just look really cool and futuristic, like the “Free Ride Pen” by designed jean Pierre Lepine. Some pens have an installed LED light, which make for easy night time writing. Novelty pens can be designed to mimic other products, such as lipsticks or cigarettes, which is always an appreciated gimmick. The possibilities are endless.

Similarly, some pens adopted a multi-purpose approach, such as an included laser pointers at their rear ends which are ideal for presentations. Other features such as attached rulers or USB drives have also been integrated into pen designs. There are also pen concepts in development which include sound recorders, Bluetooth and Wi-Fi features, music players, memory card clots, charger inputs, projectors, and cameras. There are fingerprint enabling pens, mood-adjusting pens, and self-refillable pens (read more on these here).  Pens have undoubtedly come a long way.

Perhaps the one of more interesting pen concepts which is still in development is the Colour Picker Pen, designed by Jinsu Park. While not yet in production, it aims to incorporate a smart sensor eyedropper tool, which allows artists to scan the colour of their surroundings and instantly replicate that colour on their page. This works with installed inks cartridges inside the pen, which mix together after analyzing the selected shade.

On the other end of this spectrum, there are also pens with invisible inks, only seen under certain lights or temperatures, which are constantly developing and improving.

However, probably the most innovative, practical adaptation of the pen, is the Pen Cap Eating Utensils (also spectacularly called the ‘DINE INK’ Pen Utensil Set). These pens are exactly what they sound like. At last, we can snack while we work, without the clutter of cutlery. This, is the peak of pen design.

Seemingly small but with a world of possibilities  and opportunities, the story of the Ballpoint pen is one of unexpected evolutions and exceeding expectations, where people can write their own destinies.