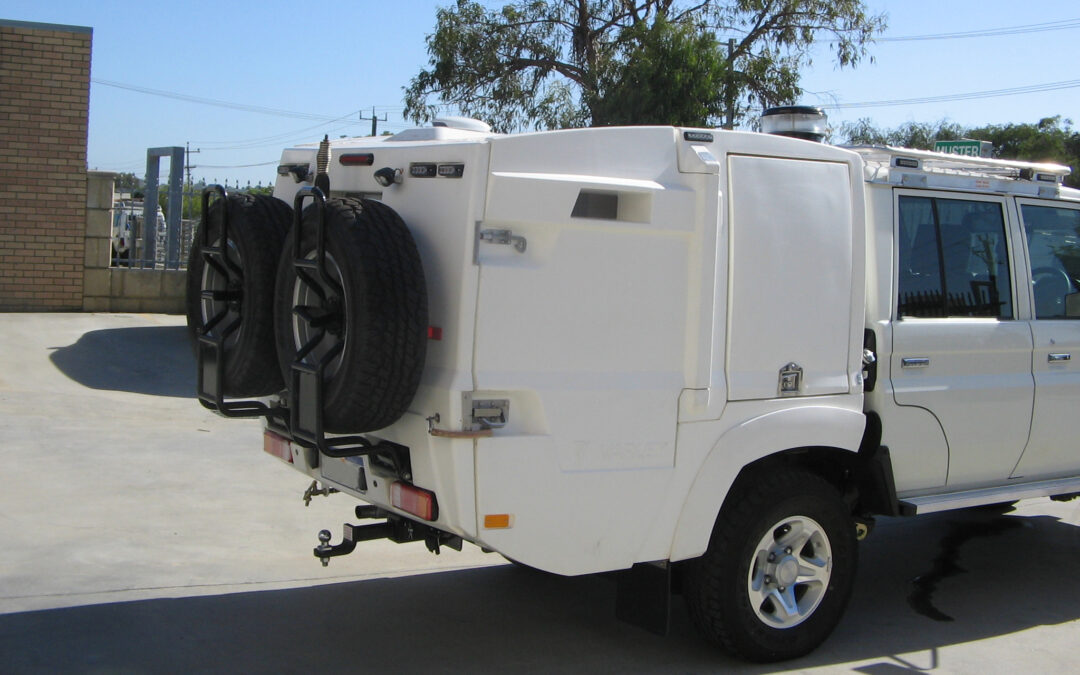 PROJECT DATE: 2015
Rotadyne collaborates with The Varley Group on a prisoner transportation model for the Western Australia Police Force using a unique rotational moulding technique which utilises multiple assembled pieces, allowing for a focus on internal features and design.

Most of us don’t get to see the inside of a prisoner transport, but the design team at Rotadyne were eager to jump in and take a ride with Varley’s specialised vehicles.

The Varley Group, an engineering and manufacturing company has been providing services locally, and internationally since 1886. Varley’s services include custom manufacturing of a myriad of products, including specialised vehicles from industrial and emergency vehicles to trailers, trucks and buses. You can learn more here.

Their collaboration with Rotadyne was an interesting exploration of specialised vehicle design and development. At their Newcastle site, Rotadyne met with project designer Liam Gibson to assess and discuss the development of their Prisoner Transport Module for police departments in Western Australia.

The new design addresses concerns for prisoner safety during arrest and transportation, aiming to avoid harm caused to the prisoner either accidentally due to resisting arrest, or deliberate self-harm from prisoners in altered and potentially dangerous states of mind. The design needed to concentrate on the internal features of the module, challenging the conventional, external features which traditionally characterise rotational moulding.

Rotadyne rose to the challenge, turning their design thinking inside out. Instead of producing a singular hollowed plastic piece, these vehicles use various separate pieces, which fit together around a central piece. The central piece focuses on the internal shape, whilst the remaining pieces define the exterior shape of the vehicle. This ultimately allows the optimisation of both external and internal design features. For Varley’s prisoner transportation module, this constituted the use of up to 14 different rotationally moulded parts. This strategy allows for the central piece to be designed with a smooth interior which allows prisoners easy access in and out of the wagon without injury or excessive effort. Rounded corners also prevent the prisoner being accidently injured and reduces the potential for self-harm. 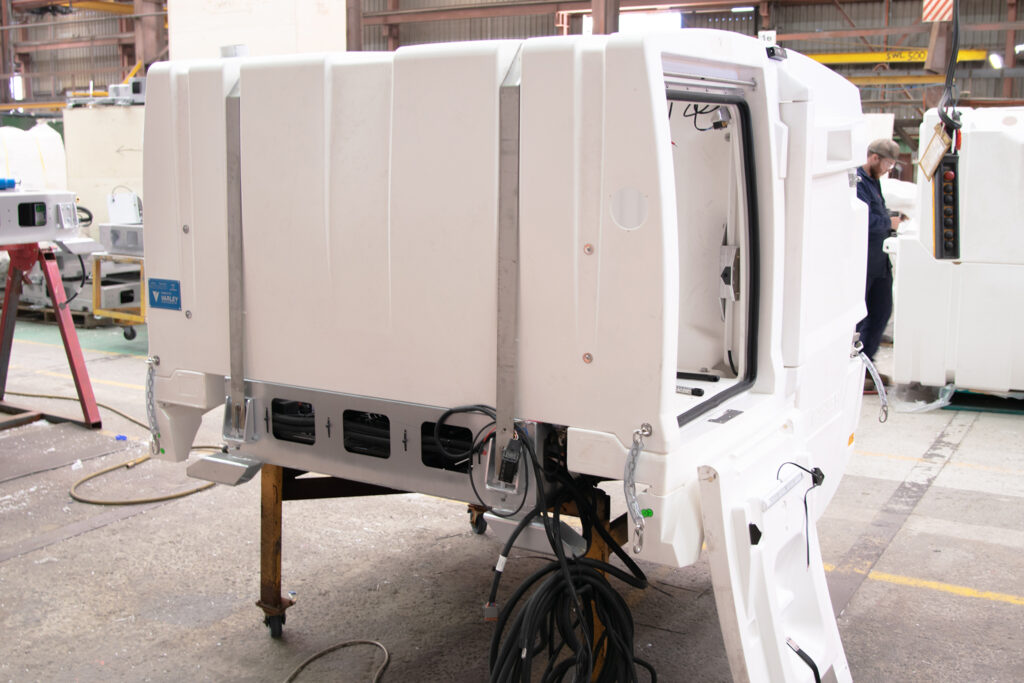 However, as often happens in the world of design and manufacturing, the use of multiple parts produced additional challenges of ensuring accuracy in measurements and simplifying the assembly to manage the level of labour intensity. Rotadyne was able to regulate these issues during the consultation process, establishing a collaborative relationship to provide advice on design and production. With Varley, the aim was tolerance control and shrinkage or warpage control on multiple parts, such as the curved vehicle doors. After the design review, these allowed for greater flexibility during assembly. Varley has observed that the original rotational moulding design took almost twice as long to assemble; this process has been significantly reduced, despite the quantity of required pieces to assemble.

“Sebastian really helped us with the knowledge on rotational moulding.” – Liam Gibson

Another common issue experienced with the previous design and vehicle experience is the damage often inflicted on the doors and wagon walls; prisoners are reported to regularly attack and violate police vehicles during arrests, meaning the vehicles require frequent and ongoing maintenance, repairs and even replacements.

To address concerns with strength and durability, design features such as ribbing were added in critical locations, such as under the entry steps. The two main pods, held together by metal straps installed over the top and sides of the vehicle, is now more positively supported by being placed in moulded channels that double as strengthening ribs. 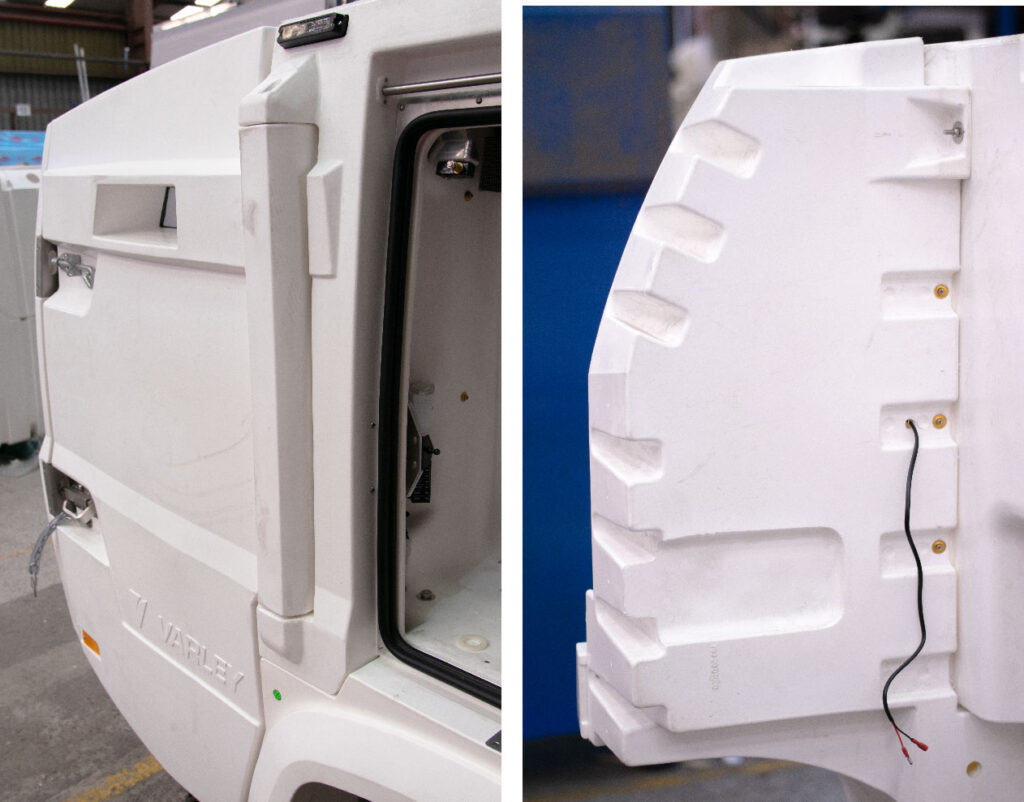 Left: Door of pod, able to lock both in open and closed position.
Right: Strengthening ribs made through moulded channels.

Rotational moulding allows for a wide range of design features in custom components due to its flexibility and freedom in design, without compromising the fabrication. We can see this on the doors in the switch, bolted on hinges and moulded axles. These improvements simultaneously increased the strength and made it less labour intensive during production. It is this flexibility which makes rotational moulding an ideal manufacturing process, and demonstrates that a strong client/supplier relationship is critical for the best product outcome.

Rotadyne places great value on open dialogue and full transparency during the design and production process. Sometimes real-world testing or trial and error play a large part in the process, perhaps resulting in late changes to tooling which can prove challenging.

“That’s the good thing about working with you guys, it’s the fine-tuning… especially when you have so many parts.” – Liam Gibson

For example, Varley and Rotadyne experimented with surface finishes on many of the pieces for the exterior of the wagons, using a textured finish to reduce visible scratches and enhance aesthetics. However, after field trials it was noted that these areas of the vehicle where more difficult to clean due to prolonged exposure to the outback’s iconic red dust, and as a result those areas on the tooling were re-surfaced to produce a more ‘washable’ gloss finish.

The result was a successful product with increased durability and safety for the end users, and reduced labour for the production team. Well resolved features such as ribbing, indentations and axle type hinges increase the reliability and strength of the product, while the use of multiple pieces to construct the finished product allows for future customisation. 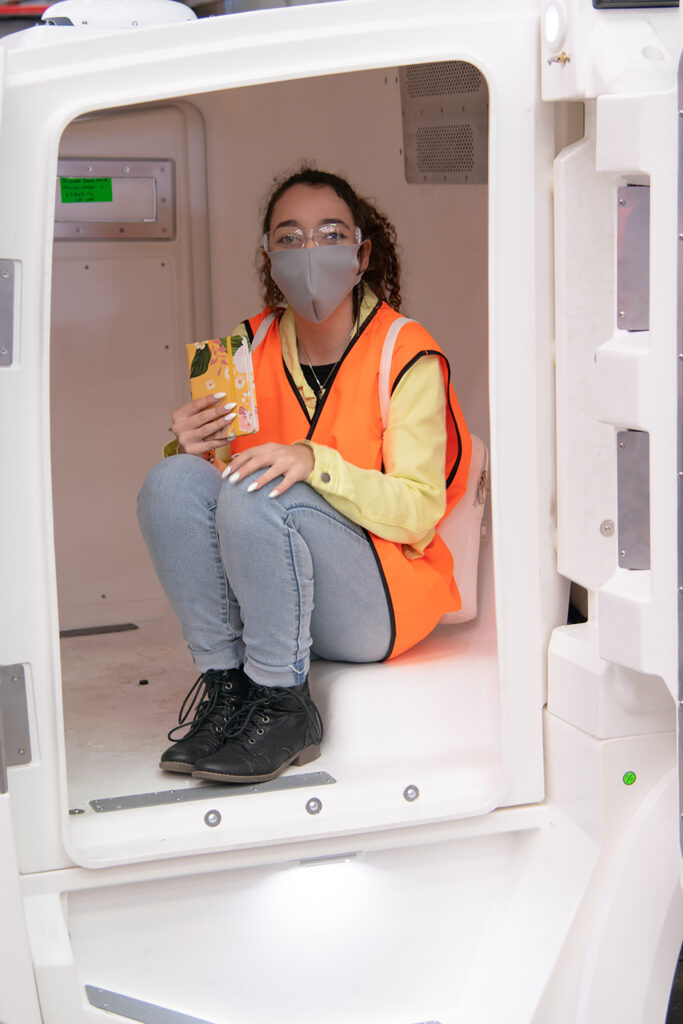 Caroline from Rotadyne taking a ride in a half-assembled pod.

Such customisation is ongoing. The assembly needs to be configured to suit different vehicle frames when manufacturers release their latest model 1-tonne utes, or when police departments around Australia update their fleets. This is reflective of the dynamic nature of design and manufacturing, which requires a high level of adaptability, versatility and the ability to think outside the box. The successful and continual adaptation of the original design is testament to Varley and Rotadyne’s collaboration, flair, and commitment to innovation. With that in mind, Rotadyne is enthusiastic to continue this dynamic and exciting journey with Varley in future projects.