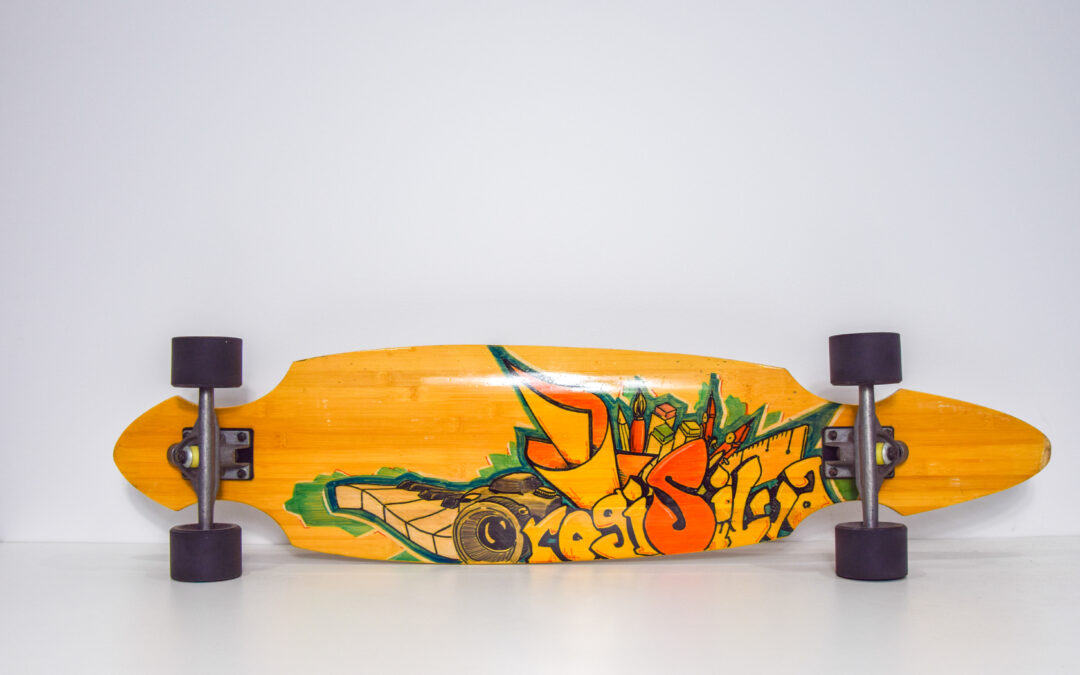 The skateboard: from underground subculture to global phenomenon, this iconic plastic product has been through many phases of popularity and design.

Skateboarding is beneficial for riders of all ages, improving fitness and physical endurance. However it also has has added potential advantages, such as improved coordination, stress relief, enhanced precision, reflex training, improved pain tolerance and even proves to increased a persons overall bravery!

It’s true that the skateboard has had controversial beginnings. Older generations may remember its predecessor, the wheeled fruit crate, from which the question of its potential danger has emerged. Such concerns have remained a hot topic throughout its history.

But today, the skateboard has been transformed and substantiated as an Olympic sport, all thanks to the introduction of one particular plastic component. 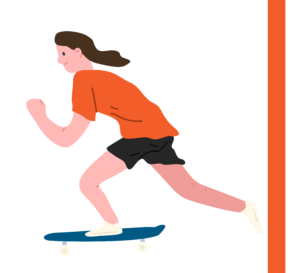 Whilst there is unconfirmed evidence that a similar device appeared in 1904, the commonly accepted invention of the skateboard was in 1930. It was a simple apparatus, made out of a fruit crate with wheels on the bottom. Similarly simplistic, the first commercial skateboard appeared in 1956, and was essentially just rollerblade wheels attached to a board.

In 1960s, skateboards were popularized by manufacturers capitalizing on the trending surfboard culture. The activity was commonly called “sidewalk surfing”. Then in 1963, the first skateboarding competition was held in by Makaha in California, however it was still labelled as dangerous, mostly due to the limited maneuverability present in its early design.

Then, by the mid-1970s, the skateboards made their comeback, all thanks to the invention of the polyurethane wheel. The 1970s also marks the introduction to the kicktail, a raised back end used for kickturns: a trick where the rider pushes down on the kicktail to lift the front wheels and spin on the rear wheels. At this point, skateboarding went international, with fans appearing around the globe, however it was still an outsider sport with a reputation for rebellion and danger.

In 1980, a steady underground skateboarding community was developing. A distinctive youth subculture with daring and individualistic undertones emerged, mostly participating in street and vert skateboarding (with mostly self-made equipment such as ramps and inclines).

After a decade, the World Cup of Skateboarding was founded in 1994, taking place across countries such as Australia, U.S, Europe, Brazil and Canada. Shortly after, X GAMES (first held in 1995) started giving skateboarding mainstream exposure and legitimacy. By then, it was established as a professional sport and maintained its independence from traditional team sports, even influencing other sports like snowboarding and roller-skating.

National Skateboarding Day is on June 21st of each year, established by the International Association of Skateboard Companies (IASC) in 2004 as an initiative to encourage the youth to prioritize physical activity and promote the sport, hopefully encouraging new fans into the community.

Paul Schmitt, a renowned skateboard designer and a recognized authority in skateboard engineering, states “there’s no pressure. It’s all great because kids are active. Not behind a phone or a TV or a computer. Anything to get them outside and rolling.”

However, some skateboarding fans have expressed disdain at the holiday, resenting the notion of excluding the activity to a single day, or to the activity becoming industrialized and as a consequence aslso becomes “too safe”, which strays from its founding “anarchist” principles. Many also hesitate to include new members into the community who are not as serious about skateboarding, or don’t share the same deep set passion for the sport.

Additionally, some skaters discourage the purchase and use of non-professional skateboards (usually plastic Skateboards, such as the Penny board), disliking how it does not meet the subcultural standards set by old school underground skateboarders. They express that it removes a sacred meaning from the sport, due to a hyper focus on capitalization and mass manufacturing rather than the art and community behind skateboarding.

Despite the controversy, each June 21st there are competitions, workshops, fundraisers and demonstrations across the world, where skateboarding fans can share tricks, tips and enjoy skateboarding together with professionals and casual skaters alike. It is a time where many in the community feel the most connected.

You can celebrate this holiday too by heading to your favourite skatepark, running a local “best tricks” contest, making skateboarding videos, and uploading them to virtual platforms to celebrate with skaters around the world! You can also build your own ramps, or take some time to teach a family member how to skate. Follow the holiday at #goskateboardingday, #skatelife or #goskateboardingday2021. And always remember to wear your helmets! 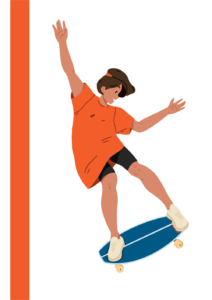 The design of the skateboard has multiple components, variations and details, which are dependent on its intended use. It can be used for short distance or stunt skating, speed racing, slalom (racing down-hill), and freestyle skating. Most skateboards are 32 inches (81cms) long, and 9 inches (23cms) wide.

Skateboards have 3 major parts: the deck (or board), trucks and wheels. The board is also divided into three sections: the nose, the wheelbase, and the tail, which are designed uniquely between skateboard variations, and can be altered in size, shape or curvature to impact factors such as leverage and board feel. Modern designs also include the kicktail on rear and nose which varies in shape. It also has a slight concave in the middle which varies in concavity, which means the board material’s flexibility and strength are essential.

The truck includes the axle, hangar, and shock absorption cushions, which also enhances the boards flexibility. This is important for performing tricks, a fundamental component of skateboarding: most of this sport centers around practicing ollies (aerial jump), grinds (riding along the edge of an object), and as aforementioned, kick turns. Trucks can be made from metal, or nylon.

The wheels differ in terms of diameter, durometer (hardness), colour and shape. Softer wheels absorb more shock, and are better for hard grounds. They are made using a mould and then a lathe, and while heat is not necessary, it can produce a higher quality wheel. Dyes, on the other hand, can weaken the wheel, but are commonly used by producers for the aesthetic appeal, and to distinguish their products from the competition, and communicate brand identity. Manufacturers also have their signature stylings for the deck and trucks, which can include particular colours or graphics.

Today, the most noticeable improvements include an increased board size, and improved truck constructions.

A skateboard’s wheels are made from tough polyurethane plastic, a popular and versatile plastic invented in 1970. These wheels permanently changed the skateboarding scene because of their rubber-like grip on the pavement, which significantly improved maneuverability and safety.

The deck was originally made of Canadian Maple plywood, then in aluminum, and finally plastic or fiberglass. Today, they can be made from nylon, however plastic skateboards are often coined as toys in comparison to the wooden ones, which have a more professional reputation among skaters and have meaningful ties to the original skateboards.

Despite this, in 1970s plastic skateboards were at their prime. A popular plastic ‘Makaha‘ skateboards were made by Larry Stevenson, who also patented the first kicktail. He states that plastic was ideal from a manufacturing perspective due to its ability to be mass-manufactured. As stated by Larry’s son, Curt Stevenson:

“My dad suggested, ‘Let’s make plastic skateboards, because I can make them every two seconds and we can get you as many as you want. They didn’t do it because it was the better skateboard. They did it because the whole world could have a skateboard now.”

The mission to popularize the skateboard aimed to make skateboarding a sport for everyone, and particularly to encourage the youth to be in an active, harmonious community.

Schmitt also states that for him, it was never about performance, but instead about self-expression and joy which makes skateboarding cool.

Some skaters like to modify their boards for a personalized riding experience, using advancements such as sails for wind-aided riding. Another example is the Freebord, designed as a longboard but with an extra wheelset which simulates the feeling of snowboarding. Streetboards, meanwhile, have two points of flex where the nose and tail can pivot, some also including feet straps. There are also collapsible Stowboards, designed to be folded and stowed away and able to fit into backpacks.

One of the most popular skateboard adaptations is the Razor Ripstik. Riding on two wheels instead of four, each wheel can pivot individually allowing for full twisting and turning capabilities. The T-Board also only has two wheels, and a larger deck. Mountain boards, or Dirtboards, have large tires suitable for rough terrain and even features such as skyhooks and bindings.

The skateboard is very much a versatile vehicle.

In regards to sustainability and product life cycle, the largest issue with skateboards are the polyurethane wheels, which are difficult and expensive to be recycled. Due to this, many end up in landfills. Although they are made for durability and built to last for a long product lifetime, they are also consequently slow to biodegrade.

On the others hand, many manufacturers have begun producing skateboards made from recycled bottle caps, recycled bottles, plastic bags. They melt down through high-density polythene at temperature of 130 degrees Celsius. Once cooled, it becomes malleable like clay, then produced into the recycled skateboards.

However, resource extraction and manufacturing issues are addressed in an innovative project run by Bureo (meaning “the waves” in Mapuche/Native Chilean). This group takes discarded fishing nets in the coastal communities of South America and recycles them into pellets which are made into innovative products, built for a good lifetime and end of life solutions. This project is called “Net Positiva”, and one of the products included is their “Minnow” Skateboard, made from 75% from recycled materials.

Essentially this fishnet collection, called “Skateboards for Plastic-Free Oceans”, have designed a fish shape board with a gripping scale pattern, which uses premium wheels made from 100% recycled cores, and includes a useful B’Hook lock feature. According to their numbers, 1 board is equal to 30 square feet of harmful plastic fishnets out of our oceans, whilst also supporting Chilean fishing communities.

Many of the improvements in the skateboard are surrounding its sustainability. Research has found ways to make the polyurethane more biodegradable which helps reduce waste significantly. However, designer Jason Knight has shared his plans to create an open source concept describing how to create a skateboarding deck using 100% recycled plastic, at home.

While he is not a skateboarder himself, he has a keen interest in the strength of recycled plastics, which is perfectly demonstrated in the application of these plastics to the thin design of the skateboard. Knight’s recycled decks weigh the same as standard decks, are more flexible, which presents new skateboarding opportunities. Knight aims to collaboratively solve the plastic waste problem as a community, by providing a free, open source download kit with instructions on how to make your own board.

Skateboarding is an significant social sport. Aside from the health benefits from engaging in physical activity, it also encourages community and provides opportunities for people to develop new connections. It teaches coordination and cooperation, as it aims to inspire friendships through the practice itself. This is what makes the globalizing qualities of plastic manufacturing, and the durable nature of Polyethylene, so essential to the boards growth, as it allows for the community to be spread across cultures and communities.